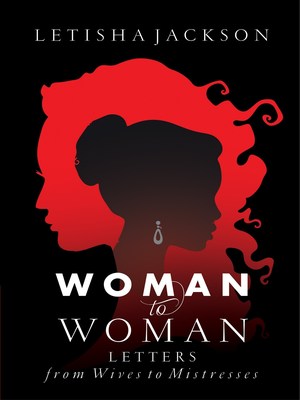 Female Author's Debut Memoir Answers Why "The Mistress&quot; Is a Continuing Problem

Celebrity Women Give It Their Endorsement

GLENDALE, Ariz., Oct. 21, 2021 /PRNewswire/ -- LeTisha Jackson's "Woman to Woman: Letters from Wives to Mistresses" boldly tells why the mistress continues to be a problem - because our perspectives haven't changed even though there's been a significant change in the mistress dynamic.

Jackson says mistresses of 2021 know what mistresses of times past did not – that they hold all the power in adulterous relationships. Due to this shift, the issue is no longer about the spouse-to-spouse betrayal, but is now about the "woman to woman" betrayal.

Believing women have been fed the false narrative that the future looks female, through her story, LeTisha asks how that's possible if, in the present, sisterhood crumbles when the want of a man - a married man - makes women complicit in tearing apart another woman's family & makes them forget their loyalty to that sisterhood.

Award-winning Journalist Bridget Smith states: "Outstanding book!...'Woman to Woman' is a freshly written exploration into the painful, and powerful impact of deception. Most importantly, this work examines the dynamic relationship women play in each other's lives…"

USA Today best-selling author, Kecia Bal, wrote the Foreword for "Woman to Woman" and states: "'Woman to Woman' is a great read! It's engaging and assumption challenging…It's refreshing, interesting—and such a poignant message. This is a beautiful read…LeTisha makes a strong argument and backs it up."

Whether wife or mistress, women will have no choice but to put themselves in LeTisha's shoes & come to see the role of mistress as she does...as a destructive betrayal.